Contemplate some able and sincere materialist, as, for instance, Mr. McCabe, and you will have exactly this unique sensation. He understands everything, and everything does not seem worth understanding. His cosmos may be complete in every rivet and cog-wheel, but still his cosmos is smaller than our world. Somehow his scheme, like the lucid scheme of the madman, seems unconscious of the alien energies and the large indifference of the earth; it is not thinking of the real things of the earth, of fighting peoples or proud mothers, or first love or fear upon the sea.

The earth is so very large, and the cosmos is so very small. The cosmos is about the smallest hole that a man can hide his head in. It must be understood that I am not now discussing the relation of these creeds to truth; but, for the present, solely their relation to health. Later in the argument I hope to attack the question of objective verity; here I speak only of a phenomenon of psychology. I do not for the present attempt to prove to Haeckel that materialism is untrue, any more than I attempted to prove to the man who thought he was Christ that he was labouring under an error.

You can explain a man's detention at Hanwell by an indifferent public by saying that it is the crucifixion of a god of whom the world is not worthy. The explanation does explain. Similarly you may explain the order in the universe by saying that all things, even the souls of men, are leaves inevitably unfolding on an utterly unconscious tree—the blind destiny of matter. The explanation does explain, though not, of course, so completely as the madman's. But the point here is that the normal human mind not only objects to both, but feels to both the same objection. Its approximate statement is that if the man in Hanwell is the real God, he is not much of a god.

And, similarly, if the cosmos of the materialist is the real cosmos, it is not much of a cosmos. The thing has shrunk. The deity is less divine than many men; and according to Haeckel the whole of life is something much more grey, narrow, and trivial than many separate aspects of it. The parts seem greater than the whole. For we must remember that the materialist philosophy whether true or not is certainly much more limiting than any religion.

In one sense, of course, all intelligent ideas are narrow. They cannot be broader than themselves. A Christian is only restricted in the same sense that an atheist is restricted. He cannot think Christianity false and continue to be a Christian; and the atheist cannot think atheism false and continue to be an atheist. But as it happens, there is a very special sense in which materialism has more restrictions than spiritualism.

McCabe thinks me a slave because I am not allowed to believe in determinism. I think Mr.

McCabe a slave because he is not allowed to believe in fairies. But if we examine the two vetoes we shall see that his is really much more of a pure veto than mine. The Christian is quite free to believe that there is a considerable amount of settled order and inevitable development in the universe. But the materialist is not allowed to admit into his spotless machine the slightest speck of spiritualism or miracle. Poor Mr. McCabe is not allowed to retain even the tiniest imp, though it might be hiding in a pimpernel.

Materialists and madmen never have doubts. Spiritual doctrines do not actually limit the mind as do materialistic denials. Even if I believe in immortality I need not think about it. But if I disbelieve in immortality I must not think about it. In the first case the road is open and I can go as far as I like; in the second the road is shut. But the case is even stronger, and the parallel with madness is yet more strange.

For it was our case against the exhaustive and logical theory of the lunatic that, right or wrong, it gradually destroyed his humanity. Now it is the charge against the main deductions of the materialist that, right or wrong, they gradually destroy his humanity; I do not mean only kindness, I mean hope, courage, poetry, initiative, all that is human.

For instance, when materialism leads men to complete fatalism as it generally does , it is quite idle to pretend that it is in any sense a liberating force. It is absurd to say that you are especially advancing freedom when you only use free thought to destroy free will. The determinists come to bind, not to loose. 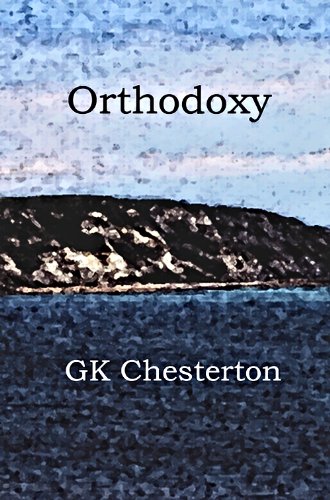 They may well call their law the "chain" of causation. It is the worst chain that ever fettered a human being. You may use the language of liberty, if you like, about materialistic teaching, but it is obvious that this is just as inapplicable to it as a whole as the same language when applied to a man locked up in a mad-house.

But it is a much more massive and important fact that he is not free to praise, to curse, to thank, to justify, to urge, to punish, to resist temptations, to incite mobs, to make New Year resolutions, to pardon sinners, to rebuke tyrants, or even to say "thank you" for the mustard. In passing from this subject I may note that there is a queer fallacy to the effect that materialistic fatalism is in some way favourable to mercy, to the abolition of cruel punishments or punishments of any kind. This is startlingly the reverse of the truth.

It is quite tenable that the doctrine of necessity makes no difference at all; that it leaves the flogger flogging and the kind friend exhorting as before. But obviously if it stops either of them it stops the kind exhortation.

That the sins are inevitable does not prevent punishment; if it prevents anything it prevents persuasion. Determinism is quite as likely to lead to cruelty as it is certain to lead to cowardice. Determinism is not inconsistent with the cruel treatment of criminals. What it is perhaps inconsistent with is the generous treatment of criminals; with any appeal to their better feelings or encouragement in their moral struggle.

The determinist does not believe in appealing to the will, but he does believe in changing the environment. He must not say to the sinner, "Go and sin no more," because the sinner cannot help it. But he can put him in boiling oil; for boiling oil is an environment. Considered as a figure, therefore, the materialist has the fantastic outline of the figure of the madman.

Both take up a position at once unanswerable and intolerable.

Of course it is not only of the materialist that all this is true. The same would apply to the other extreme of speculative logic. There is a sceptic far more terrible than he who believes that everything began in matter. It is possible to meet the sceptic who believes that everything began in himself. He doubts not the existence of angels or devils, but the existence of men and cows. For him his own friends are a mythology made up by himself. He created his own father and his own mother.

This horrible fancy has in it something decidedly attractive to the somewhat mystical egoism of our day. That publisher who thought that men would get on if they believed in themselves, those seekers after the Superman who are always looking for him in the looking-glass, those writers who talk about impressing their personalities instead of creating life for the world, all these people have really only an inch between them and this awful emptiness.

Then when this kindly world all round the man has been blackened out like a lie; when friends fade into ghosts, and the foundations of the world fail; then when the man, believing in nothing and in no man, is alone in his own nightmare, then the great individualistic motto shall be written over him in avenging irony. The stars will be only dots in the blackness of his own brain; his mother's face will be only a sketch from his own insane pencil on the walls of his cell.